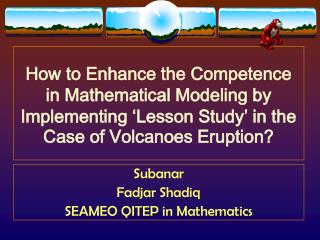 How to Enhance the Competence in Mathematic al Modeling by Implementing ‘Lesson Study’ in the Case of Volcanoes Eruption?. Subanar Fadjar Shadiq SEAMEO QITEP in Mathematics.

Mathematics Mastery - . parent information. a belief and a frustration. mathematics mastery. success in mathematics for

Marketing Mathematics - . “a basic skill needed in life and in any business”. marketing mathematics. what kind of

What is the purpose of mathematics ? - . ” towards a philosophy of critical mathematics education ” ole skovsmose

Mathematics in the MYP - . objectives. the objectives of myp mathematics define what the student will be able to

Department of Mathematics and Statistics - . our department. 23 regular full-time faculty over 300 mathematics and