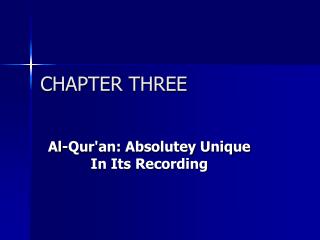 CHAPTER THREE. Al-Qur'an: Absolutey Unique In Its Recording. Among all the extant religious literature of the world, the Noble Qur'an is absolutely unique. Its recording and preservation are miraculous!.