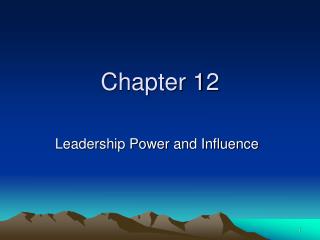 Chapter 12. Leadership Power and Influence. “If a man can accept a situation in a place of power with the thought that it’s only temporary, he comes out all right.  But when he thinks that he is the cause of the power, that can be his ruination.”  Harry S. Truman.