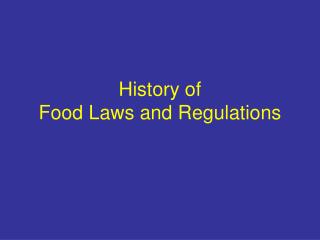 History of Food Laws and Regulations History of Food Laws and Regulations

SERVSAFE/CHAPTER 6 - . the flow of food: purchasing, receiving, and storage. facts. an approved food supplier is one that

CANADA’S FOOD GUIDE - . history of the guide the food groups recommended daily servings what is a serving.

Introduction to Canon Law - . pastoral leadership program track a 2006-2007. what is canon law?. canon law is the body of

STATEWIDE TRAVEL REGULATIONS - . august 2010. general information. the travel regulations can be found at