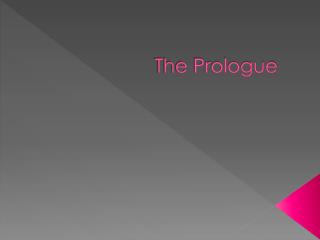 Rewriting Romeo and Juliet Prologue - . rewrite each line of the prologue and replace it with modern everyday english.

Prologue - . describe the setting grandma’s house; small town in illinois, during the great depression. prologue. what

The Prologue to The Canterbury Tales - . the monk the friar the merchant the oxford cleric. the monk. the monk.

Prospects for Study of CPV in the Charm Sector - . brian meadows 10 november 2012. . texpoint fonts used in emf. read the