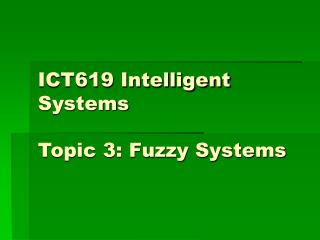 Intelligent Systems - . rule learning. where are we?. tom mitchell “machine learning”. slides in this lecture are

Fuzzy Set and Fuzzy Logic - . basic ideas and entities in fuzzy set theory operations and relations on fuzzy sets how to