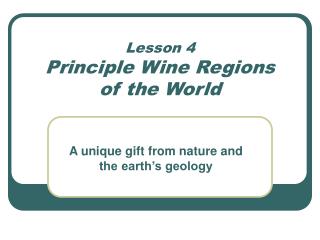 Lesson 4 Principle Wine Regions of the World - . a unique gift from nature and the earth’s geology. 4.0 introduction.

Regions of the World - . for the purposes of this class, the world is divided into 10 regions. the divisions were made

Regions of the World - . physical regions. the term ‘physical’ in geography refers to: landforms vegetation climate.

Regions of the world - . an overview. what defines a region?. regions are areas defined by specific factors, like

WINE MAKING REGIONS - . international wine regions. introduction. this module will introduce you to the primary wine

Lesson 13.3 The Counting Principle - . essential question: how do you use the counting principle to count outcomes?.

Principle 4 - . openly examine and confess my faults to myself, to god, and to someone i trust. “happy are the pure