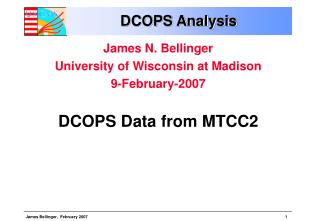 DCOPS Analysis. James N. Bellinger University of Wisconsin at Madison 9-February-2007 DCOPS Data from MTCC2. Simple Analysis. This is not a substitute for using COCOA, which is what we intend for the final determination of position.