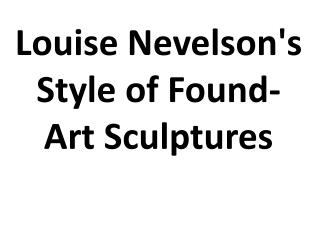 WOODLAND STYLE OF ART - . samples from the aboriginal group of seven and other woodland style artists. carl ray -

Sculptures of Animals - . and the amazing materials they are made from…. plant sculptures. bronze sculptures. wire

Sculptures - . three-dimensional art dates back to the prehistoric period of human history. ancient cultures from greece,

Contemporary Art Sculptures for Sale – Things to know - Shopping has changed drastically in the past few years. today,

The Found Object in Textile Art - . by cas holmes . the found object . found object can be anything from... s afety pin