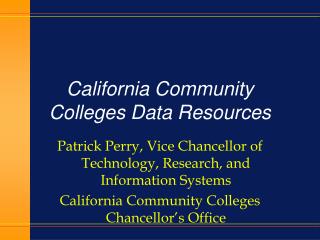 The Status of Internationalization of Community Colleges - . presented by: gretchen carroll, j.d., m.b.a. professor of

Institutional Review Boards: Why California Community Colleges Need Them and How To Get Started - . daylene meuschke,

GIS Data - Prepared by:. john mcgee jennifer mckee. with support from:. nsf due-0903270. gis data. in partnership with:.

From Access to Success in California’s Community Colleges: No Time To Waste - . nancy shulock presented at center for