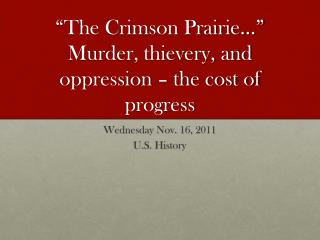 “ The Crimson Prairie… ” Murder, thievery, and oppression – the cost of progress

“ The Crimson Prairie… ” Murder, thievery, and oppression – the cost of progress. Wednesday Nov. 16, 2011 U .S. History. Spark ???. A. “ How could existence go on…If life is to thrive and endure, it must at least have something to hide behind.”

“ The Crimson Prairie… ” Murder, thievery, and oppression – the cost of progress

How To Deal With Demons &amp; Spiritual Oppression - . lecture 4 of the spiritual warfare seminar by john edmiston.

The Crimson Prairie Part 2 - . in a few sentences, explain how the native american concept of owning land differed from

The Formation of the Tallgrass Prairie - . a most perplexing question. objectives. to be able to identify and describe

Ecology Review - . which of the following is not a biotic factor in a prairie dog ecosystem?. a. grass and other plants

Q&amp;A - . paper 2. what examples of oppression are their in each of the texts?. gender – women must wear the

The Lunchroom Murder - . simple arguments of fact. objective. by the end of the lesson &amp; homework, you will be