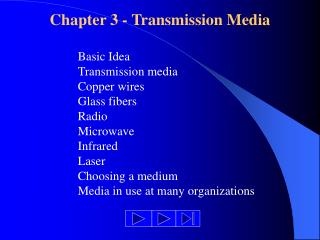 Chapter 12 - . transmission control protocol. objectives. upon completion you will be able to:. be able to name and

Chapter 4 - . attitudes: evaluating the social world. this multimedia product and its contents are protected under

Chapter 3: Conducted and Wireless Media - Objectives after reading this chapter, you should be able to: outline the

Video - Chapter 11 overview in this chapter, you will learn to identify variations of cd media technology identify