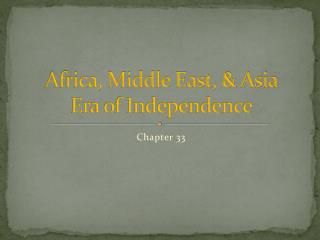 Africa, Middle East, & Asia Era of Independence. Chapter 33. The Colonial Divisions of Africa and the Emergence of New Nations. The Partition of South Asia: The Formation of India, Pakistan, Bangladesh & Sri Lanka Chapter 14 - . water. core case study: water conflicts in the middle east - a preview of the future. many countries in