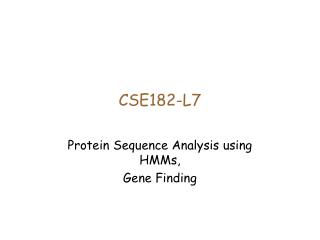 CSE182-L7. Protein Sequence Analysis using HMMs, Gene Finding. Domain analysis via profiles. Given a database of profiles of known domains/families, we can query our sequence against each of them, and choose the high scoring ones to functionally characterize our sequences.

CSE182-L16 - . lw statistics/assembly. silly quiz. who are these people, and what is the occasion?. genome sequencing and

DNA Sequence Analysis - . 5.1 introduction 1. terms in common use are defined, and the genetic code is reviewed. 2.

CSE182-L9 - . mass spectrometry quantitation and other applications. ms based quantitation. the intensity of the peak

Consumer Profiles - . the demographics. what is a consumer profile?. marketers create profiles on consumers. then they

Motivated Sequence - . a pattern of organization designed to motivate and persuade an audience to take action. monroe’s