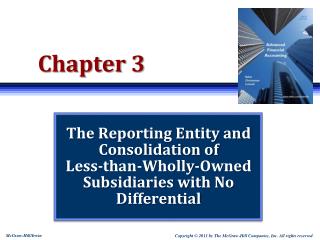 Chapter 3. The Reporting Entity and Consolidation of Less-than-Wholly-Owned Subsidiaries with No Differential. Learning Objective 1. Understand and explain the usefulness and limitations of consolidated financial statements. Consolidation: The Concept. The Reporting Entity and the Consolidation of Less-than-Wholly-Owned Subsidiaries with No Differential - Chapter 3. the

Consolidation of Less-Than-Wholly-Owned Subsidiaries - . more than a consolidated balance sheet, however, is needed to

THE REPORTING ENTITY - . gasb #14. the reporting entity includes :. the “primary government” (pg); those the pg is

Greater Than and Less Than - . 1 to 99. cut out your numbers and symbols then place them back in the plastic bag when you

Local, Privately Owned and Less Costly - . the growth of the us funeral services industry appears to be stagnant, as the