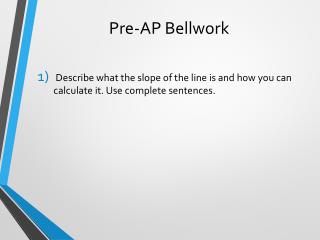 Pre-AP Bellwork. Describe what the slope of the line is and how you can calculate it. Use complete sentences. Pre-AP Bellwork. 2) Sketch the a figure for the given information. Then state the postulate that the figure illustrates a. AB and EF intersect in point C Pre-AP Bellwork - . 7) the radius of a circle is 4 feet. describe what happens to the circle’s area when the radius is

Pre-AP Bellwork ( Bellwork sheet # 7) - . 1) define midsegment of a triangle. draw a picture to illustrate a midsegment .

Pre-AP Bellwork 9-26 - . write the converse, contrapositive, and inverse of the following conditional: if the slope of

PRE-AP - . lit. terms packet #1. rhetorical devices. t he skilled use of language as an art. analogy. comparison made

Pre-AP Physics - . what did i get myself into?. get out your homework. pass your homework up so that it can be collected.

Solutions Pre-AP - . chapter 13: solutions. chapter 13.1: types of mixtures. suspensions particles in a solvent are so