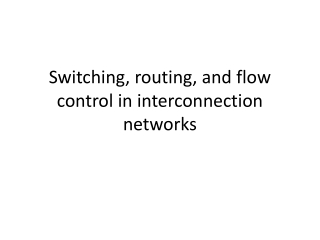 Switching, routing, and flow control in interconnection networks - . switching mechanism. how a packet/message passes a

Routing in packet switching networks - . routing is a key function: determine a (best) path from any source to any

ITEC 275 Computer Networks – Switching, Routing, and WANs - . accuracy is a measurement of lost packets. this