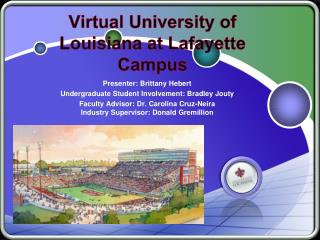 UNIVERSITY OF LOUISIANA at Lafayette - . developing the new paradigm for a competitive biofuels industry. processing

Meet some students from the IEP at the University of Louisiana at Lafayette! - . it’s not half the work, it’s twice

Lafayette City Of Louisiana Is The Best City - Avery island is the home of the world-renowned mcilhenny tabasco company.

Marwadi University- Life at Campus - At marwadi university, we believe in delivering our students the best college

The Virtual Campus - . supporting offender learning.... …how technology can be used to support offender education