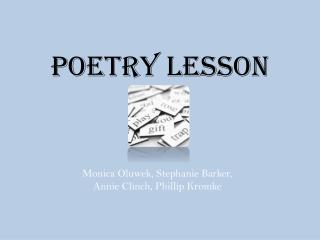 Poetry Lesson - . by poland. what is important to us

A Poetry Lesson - . “ i cannot go to school today, ” said little peggy ann mckay. “ i have the measles and the

Allusion Lesson in Poetry Unit - . candle hat in most self-portraits it is the face that dominates: cezanne is a pair of

Lesson 1: Introducing Poetry Learning Objectives - . by the end of the lesson i will: be able to show an appreciation for

Conversation lesson Unit 14 – Poetry/ Song Teacher: Anderson - . do you like poetry ? how often do you read it? who are