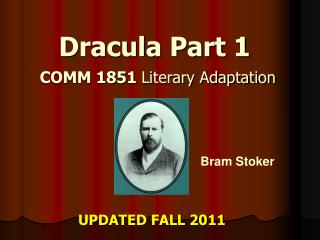 Vampires - . historical and literary background of dracula and the undead. the novel. bram stoker’s dracula was a

Literary AllusionS - . a literary allusion is an indirect reference to another literary work, or a famous person. .

Adaptation - . sbi 3u november 15 th , 2012. what is adaptation?. adaptation is any trait that enhances an organism’s

Dracula - . between myth and reality. dracula - a character that is always en vogue for so many centuries, is a name that

Fear - . dracula and darwin. agenda. the omnipresence of dracula fear and phobia fear in / and dracula (aristotle, freud,

Horror Movie Jeopardy - . this author’s dracula has been adapted theatrically close to 200 times. this california town

Dracula - . the life and times of bram stoker and the gothic novel. bram stoker. born abraham stoker, april, 1847 in

DRACULA - Mrs . almeyda’s 4 th grade history class lesson. dracula. the true story a look at the history behind the