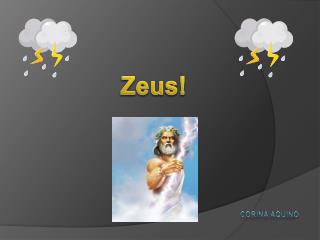 Zeus!. Corina Aquino. Zeus!. Zeus’ Roman name is Jupiter He is the god of Sky, Weather, Order and Fate His symbol is the lightning bolt. Zeus. Zeus cheated on his wife a lot of the time. Zeus is the most important god Greek Gods - . aphrodite. zeus. hermes. athena. artemis. video. zeus. zeus roman name is jupiter. he is the king of the

Zeus - . by n.s. . the start of zeus. rhea (zeus’s mom) gave cronos a rock instead of zeus to swallow. who is this

ZEUS - . by claire douglas, wendy berry and laura moorcroft. zeus . zeus was the god of the sky and ruler of the

The statue of Zeus - . where was made and how tall was it. the statue of zeus at olympia was a giant seated figure, about

NLO QCD fits How far can we get without jet data/HERA-II data? - . a . m . cooper-sarkar march-04 collaboration meeting

Inclusive Diffraction at HERA From The ZEUS Experiment - . presented by b.loehr on behalf of zeus. new data from the

Does KNO scaling hold for DIS and Diffractive DIS? - Ismd2005. kromeriz. multiplicity structure of inclusive and

INFORMATION ABOUT THE GREEK GOD ZEUS

The Olympian Gods - . and some of their attributes. zeus. zeus. scepter throne. zeus. lightning. zeus and athena. zeus

The Olympians - . zeus. zeus was the god of the sky and ruler of the olympian gods. zeus overthrew his father, cronus. he