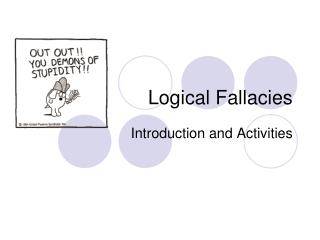 Logical Fallacies. Introduction and Activities. What is a logical fallacy?. A fallacy is an error of reasoning. These are flawed statements that often sound true

The Logical Structure of Algorithms - Algorithms steps necessary to complete a task or solve a problem. example: recipe

Towards a new empiricism in linguistics - . john a. goldsmith the university of chicago. a touch of history.

Aristotle’s Rhetorical Appeals and fallacies of logic in Thomas Paine’s The Crisis, NO. 1 - . remember yesterday?.