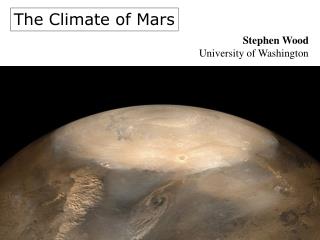 The Climate of Mars. Stephen Wood University of Washington. Why Study Mars?. Why study mice? For climate science in particular, Mars is especially valuable because: Its climate system is relatively simple and predictable No oceans = no long-term “memory” The Equatorial Rainforest - . standard grade geography: climate. climate case studies . for each climate region, you are

What is climate ? - . the pattern of weather that occurs in an area over a long period of time, such as 30 years. it

Creating a Martian Weather and Climate Reanalysis: Perspectives from Spacecraft and Models - . with acknowledgements to:

Life On Mars - . mars is the only planet in our solar system to have frozen carbon dioxide snow it happens all year round