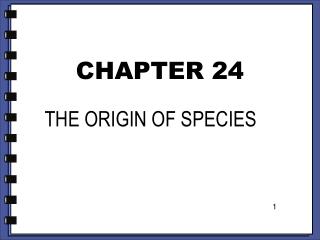 CHAPTER 24. THE ORIGIN OF SPECIES. 1. OVERVIEW. A. Speciation Is defined as the origin of new species (process by which one species splits into two or more species) Is at the focal point of evolutionary theory which must explain how new species originate and how populations evolve

Chapter 24 - . the origin of species. speciation = origin of new species microevolution = adaptations that evolve within

Chapter 24 - . suicide. suicide. a significant public health problem in the united states in 2008 eleventh leading cause

Chapter 24 - . the chemistry of life. molecules of life. many of the most important molecules in our body are polymers.

Chapter 24: Last Homecoming and Trial - . october 8, 1896 rizal learned that the madrid papers were full of stories

Chapter 24: Auditing - . overview what is auditing? what does an audit system look like? how do you design an auditing

Chapter 24 - . chemically mediated responses and substance-related disorders. the cage questionnaire. have you ever felt

Chapter 24 - . geometric optics. goals for chapter 24. to study reflections from a plane surface. to see how reflections

Chapter 24 - . prometheus: the greek trickster. prometheus. this greek figure is perhaps the best-known example of a

Chapter 24 - . antiemetics and emetics. nausea and vomiting. emetic center of the brain is stimulated goal is to empty

Chapter 24 - . transition metals &amp; coordination compounds. gemstones. the colors of rubies and emeralds are both