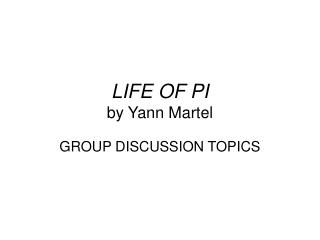 LIFE OF PI by Yann Martel LIFE OF PI by Yann Martel

Discussion Questions - . life of pi chapters 37-55. in your current group…. in part two, the author/narrator’s voice

Life of Pi - . yann martel's imaginative and unforgettable life of pi is a magical reading experience, an endless blue

Life of Pi Chapters 63 to 69 - . by gabrielle wiltse and jessica mackie.

What is Pi? - . by: gary wright. it is the 16 letter of the greek alphabet . the consonant sound represented by this

History of Pi - . by julian wolf. babylonian pi. the ratio of the circumference to the diameter of a circle is constant

Sigmund Freud’s Theory of the Unconscious - . yann martel, life of pi. who was freud?. austrian psychologist based his

Life Of Pi by Yann Martel - . introductory notes. folktales…. t he of all literature and the of many books and films.