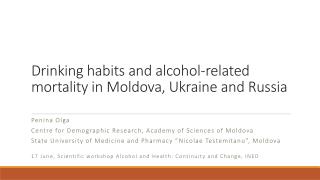 Drinking habits and alcohol-related mortality in Moldova, Ukraine and Russia Drinking habits and alcohol-related mortality in Moldova, Ukraine and Russia

Seven Habits of Highly Effective People - . restoring the character ethics. what are habits?. knowledge , skill and