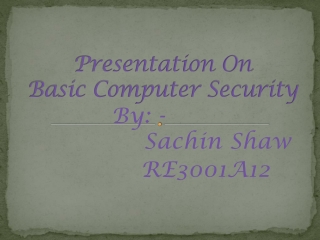 SECURITY ON THE COMPUTER! - . lauren pidgeon 8p. keeping your stuff safe!. viruses!!!. what is a virus?. it can get your

Website on Computer Security - . by: brittany freeman. what is computer

Basic Computer - . the following discussions are based on a fictitious computer called “basic computer” by the author

Basic Computer - . systems. a computer is . . . a purely digital device definition: digital is a type of electronic

Computer Basic - . chapter one. what is a pc desktop and what do you do with it?. parts of a pc desktop. icons. icons.