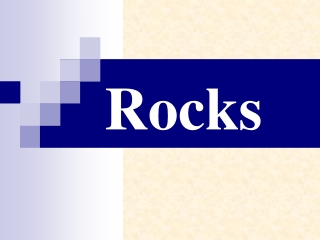 Metamorphic Rocks - . metamorphic rocks. when rocks are baked by heat of molten magma or squeezed by the movements of

Rocks - . material that forms the earth’s crust. what are rocks made from?. rocks are made up of different minerals.

The Changing Earth - . chapter thirteen: formation of rocks. 13.1 the composition of rocks 13.2 igneous rocks 13.3 how

The Three Different Types of Rocks: - . igneous . metamorphic. sedimentary. where do rocks come from?. where do you see

How Rocks Get Where They Get - . sedimentary rocks earth science. transportation &amp; deposition. for clastic rocks

Rocks are awesome - . by elizabeth. igneous rocks are made from a liquid called magma. they eventually will find water

Different Types of Rocks - . 6 th grade . how do rocks form? . igneous rocks : forms from the cooling of magma or lava

Rocks and Weathering - . w richards the weald school. what are rocks?. rocks can be found here…. …and here…. …and

Introduction to Rocks - . geology unit 2. what are rocks?. rocks are simply aggregates (combinations) of one or more

Classifying Rocks - . s e c t i o n 5 - 1. objective. what characteristics are used to identify rocks? what are the three

I got a rock! - . what could we want to know about rocks?. what is in rocks? how are rocks made? what kinds of rocks are

Sedimentary Rocks - . rocks made of bits &amp; pieces of other rocks. sedimentary rocks. igneous rocks are the most