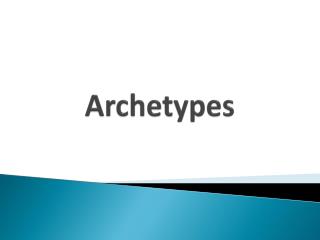 World Literature Unit One Jeopardy - . zoroastrianism centers on this common archetype. good vs. evil. back. the

Joseph Campbell The Journey of a Hero - . hero archetypes. hero as warrior : a near god-like hero faces physical

Archetypes - . our connection to stories. what is an archetype?. an original model after which other things are similarly

Archetypes - . agree or disagree?. as the following statements appear on the screen, move to the right side of the room

Character Archetypes - . a brief overview of the basics of archetypes in literature. ms. mitchell’s class. from an

Archetypes and Symbols - . communication arts i. archetypes. an original model on which something is patterned or based a