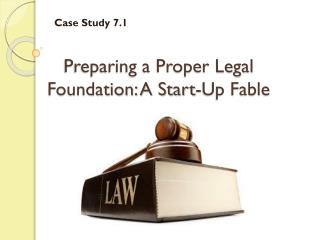 Understanding a Fable - . specific information about a fable. definition of fable. a fable is a short story which leads a

Start up legal and tax issues - . business names. the business name can not be the same as another established business.

A Fable by Aesop - The silly wind and the clever sun. a fable by aesop. melibea alarcón bautista. ja, ja, ja,… ! that

What is a fable? - . ms. van dyke. allegory. an allegorical narrative allegory: an extended metaphor metaphor: a

How To Write A Fable - . advanced language arts. fables…. …a story that teaches a lesson …characters are animals

The City as a Start-up - . a status report on los angeles march 2013. the good news (our strengths). huge market city of

How to Write Up a Proper Lab Report - . title. it is not necessary, but you can be creative with the title of the lab as

Marketing in a Start-Up - . spring faculty boot camp. creating the marketing plan. process. what is

Setting up a Legal Scientific Notebook - . 1 st setting up your legal scientific notebook. all the work you do as a lab

Get Proper Legal Counseling Before Filing A Divorce Case - As per the statistics, the divorce cases get very much

Start-up a restaurant business: - For more information visit our website