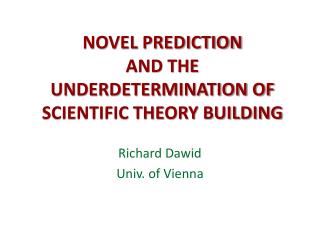 NOVEL PREDICTION AND THE UNDERDETERMINATION OF SCIENTIFIC THEORY BUILDING

NOVEL PREDICTION AND THE UNDERDETERMINATION OF SCIENTIFIC THEORY BUILDING. Richard Dawid Univ. of Vienna. A General Strategy. To the Bayesian, confirmation is an increase of the probability of a theory’s truth due to empirical data. P(T |E)/P(T)= P(E|T)/P(E)

NOVEL PREDICTION AND THE UNDERDETERMINATION OF SCIENTIFIC THEORY BUILDING

Realism—Relativism—Pragmatism - . realism and relativism: an overview. they are about the „evaluation” of

Truth and Reality - . announcement: tutorial group 10 will meet next wednesday at 2:00 reminder: your portfolio will be

What is the Role of Affect in - . delusion formation ?. vaughan bell school of psychology, cardiff university. hadyn

Scientific Theory and Scientific Law - . why do we need both ? lesson 1. instructions for use of scientific theory and

TI and TSVF: A comparison and some remarks about free will - . ruth e. kastner trinity college cambridge 2014. part 1:

Software Estimation: What, Why &amp; How - . nupul kukreja 19 th october 2012. based on software estimation:

Measurement Error: The difference between an observed variable and the variable that belongs in a multivariate

Chapter 7 Does Science Tell Us the Whole Truth and Nothing but the Truth? - . introduction. philosophy of science –

Realism vs Anti-realism - . topics. the problem of unobservability the “no miracles” argument the observable /