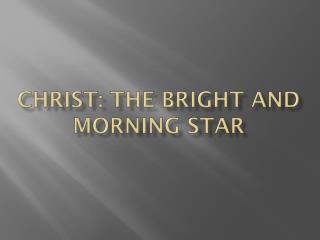 Christ: The bright and morning star Christ: The bright and morning star. Introduction. “I, Jesus, have sent My angel to testify to you these things in the churches. I am the Root and the Offspring of David, the Bright and Morning Star.” ( Rev 22:16). I am the Root….

Christ: The bright and morning star

#352 Lord Jesus, When I Think Of Thee Lord Jesus Christ, My heart is thrilled, - When e're i think of thee; and long

In your relationships with one another, have the same attitude of mind Christ Jesus had: - 14 and the word became flesh

Jesus Christ King of Kings and Lord of Lords - . 1 timothy 1:17 now unto the king eternal, immortal, invisible, the only

#145 The Lily of The Valley I have found a friend in Jesus, He's every thing to me, - He's the fairest of ten thousand

Jesus prophet of God - . by robert c. archer. what is a prophet?. “ one who speaks forth or openly, a proclaimer of a

PRAISES TO JESUS (1) Lord Jesus, I praise and thank you All this praises I offer you - Praise you jesus the son of god

All hail King Jesus All hail Emmanuel King of Kings Lord of Lords Bright Morning Star - . and throughout eternity i'll

The Feast of the - . we three kings of orient are bearing gifts we traverse afar field and fountain, moor and mountain