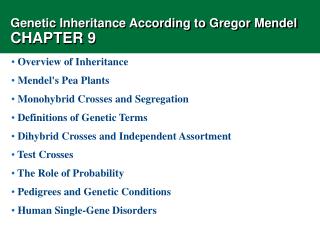 MENDEL AND THE GENE IDEA - . introduction. 1. mendel brought an experimental and quantitative approach to genetics 2. by

Mendel and the Gene Idea - . modern genetics began in an abbey garden, where a monk named gregor mendel documented the

Inheritance - . inheritance is a form of software reuse in which a new class is created by absorbing an existing

Genetics - . explain the basic rules and processes associated with the transmission of genetic characteristics. describe

Mendel and the Gene Idea - . inheritance. the passing of traits from parents to offspring. humans have known about