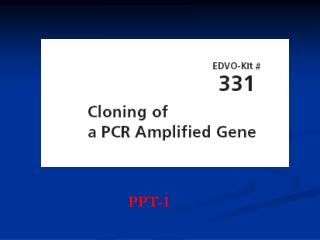 PPT-1. Experiment Objective:. The objective of this experiment is to amplify a DNA fragment by Polymerase Chain Reaction (PCR) and to clone the amplified DNA by using the blue/white cloning system. Brief Description of Experiment. This experiment has four modules with the following objectives: