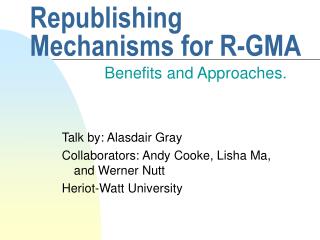 Republishing Old SEO Blog Post - During the life span of your blog, most likely you will have written a lot of articles,

Mechanisms for Evolution - . no evolution!!!. dna. negative. crossing over. many. combinations. creates genetic

Mechanisms for Evolution - . natural selection traits that improve survival or reproduction accumulate in the population

MECHANISMS FOR EVOLUTION - . honors biology. review. evidence for evolution and examples what is natural selection? how

Performance of the Relational Grid Monitoring Architecture (R-GMA) - . cms data challenges. the nature of the problem.