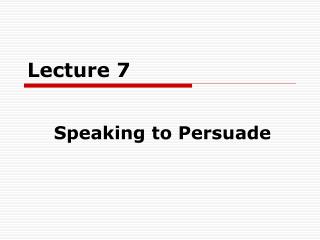 Lecture 7. Speaking to Persuade. Ethics and persuasion: . It is not possible to bring about a truly beneficial result by using unethical methods. ---Martin Luther King Set ethical goals; Be honest; Use the language responsibly. . Persuasion is …. A psychological process;