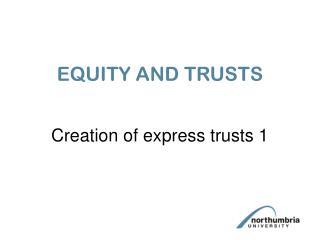 Equity and Trusts – Introduction &amp; Historical Origins (2) - . maitland. other jurisdictions outside of the

An Introduction to: OBRA ‘93 Special Needs Trusts - . when congress enacted the omnibus reconciliation act of 1993

EQUITY AND TRUSTS - . charities 1. in this section we will consider:. the structure of charitable organisations

ISSUES FACING THE AUSTRALIAN NATIONAL TRUSTS IN 2013 AND BEYOND - . australian council of national trusts. a paper

Collaborations, Federations, Trusts and Academies - . what does it all mean?. a game of two halves. collaboration

Welcome to the Equity and Trust Law module - . add tutor name and date. before we get started, please run the audio setup