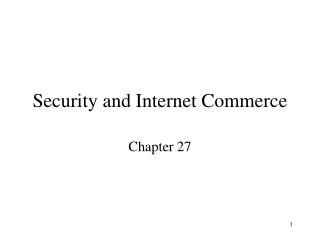 Security and Internet Commerce. Chapter 27. Security in Transaction Systems. Security is essential in many transaction processing applications Authentication Is the user who he says he is? Authorization What is an authenticated user allowed to do? Only cashiers can write cashier’s checks The Internet and e-Commerce - . remember networks?. there’s no reason why every network can’t be connected to some

Electronic Commerce and the Internet - . chapter 6. chapter objectives. describe what the internet is and how it works

E-commerce Security - . by john doran. what is e-commerce?. the buying and selling of products or services over the