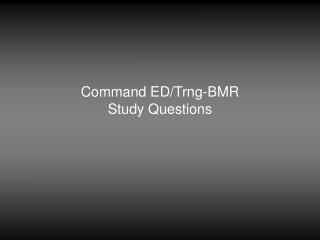 Command ED/Trng-BMR Study Questions. The Navy's new mine countermeasures capability relies on which of the following components?. A. Avenger class (MCM) B. Osprey class (MHC) C. Craft of Opportunity Program (COOP) D. All of the above Answer: D 91-3-4-65. Exit. EOCT Study Guide - . eoct at a glance. all questions are multiple choice each section of the american literature eoct

Sense-Shoot-Command on the Battlefield After Next - . koblenz symposium on information technology network centric warfare

Driver Examination Study Questions - . question 1. how many passengers can be in the vehicle if the driver holds a

The Driver Behind Assessment: Intellectual Curiosity about Research or Study Questions that Lead to Changes in Pedagogy