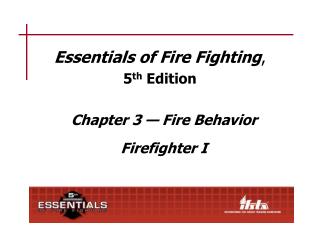 Essentials of Fire Fighting , 5 th Edition. Chapter 3 — Fire Behavior Firefighter I. Chapter 3 Lesson Goal. After completing this lesson, the student shall be able to summarize physical and chemical changes and reactions that occur with fire and the factors involved in fire development.