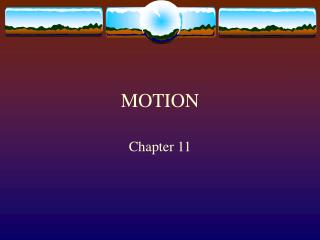 MOTION. Chapter 11. How do you know something is moving?. Depends on your frame of reference. A frame of reference is the location from which motion is observed. Most common: the earth. Measuring distance. Distance: the length of a path between two points.

MOTION - . it is derived from the greek word “ kinema ”, meaning “ motion”. dynamics  study of the causes of

Motion - . event that involves a change in the position or location of something. definition. motion is relative.

Motion - . motion is a change in an object’s position relative to a reference point. definition. motion is relative.

Motion - . motion. motion occurs when an object changes position relative to a reference point don’t have to see it

Motion - . the basic description of motion is how location (position) changes with time. we call this velocity . is

Motion - . - the process of changing position. describing position. reference point – the starting point you choose to

Motion - . chapter 11. distance and displacement. to describe motion accurately and completely a frame of reference is

Motion - . what is motion?. motion is nothing,but movement. when do you say that you are moving? if you are standing in a