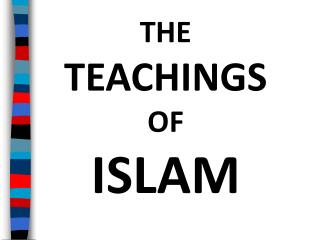 THE TEACHINGS OF ISLAM

THE TEACHINGS OF ISLAM. Essential Question : What are the major teachings of Islam?. ISLAM’S ORIGIN. Islam is a religion that was founded in the early 600s in Arabia (present-day Saudi Arabia). ISLAM’S ORIGIN.

THE TEACHINGS OF ISLAM

Islam - . words to understand. theocracy - a government where religion is the basis for all decisions made in the nation

Understand how Muhammad became the “prophet of Islam.” Describe the teachings of Islam. - Objectives. understand how

The Teachings of Islam - . is this the truth?. structure. similarities between islamic beliefs and the christadelphians

Philosophy of the Teachings of Islam - . a book of the promised messiah (a.s.) written for, and read out at, the

Islam - . important terms. islam : an arabic word that means “peace through submission to god” muslim : a person who

Islam - Re-cap yesterday’s mosque debate what was the debate about? what were the two sides of the debate? what is

The Origins of Islam - . muhammad and mecca. muhammad was born in mecca around 570 became a successful trader mecca:

The Teachings of Islam - . background on islam. islam has more followers than any religion except christianity. muslims

The Teachings of Islam - . chapter 9. a little background. islam began in the arabian peninsula and quickly spread