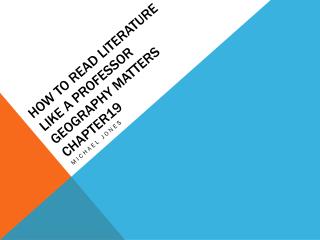 How to read literature like a professor geography matters chapter19 How to read literature like a professor geography matters chapter19. Michael Jones. Setting is symbolism. Where the story is set is another important factor in literature Certain places stand for safety, like a suburban town, while places like the jungle brings wilderness and confusion.

How to read literature like a professor geography matters chapter19

3. Be able to critically read and evaluate the scientific literature. - Goals for mcb 5068. 1. obtain a solid foundation

Chapter 1: The World of Geography - . chapter 1: what is geography? * it is the study of our earth; our home. or