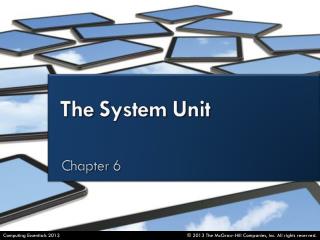 Describe the six basic types of system units . Discuss how a computer can represent numbers and encode characters electronically. Describe each of the major system unit components. Discuss microprocessors , including microprocessor chips and specialty processors. Taste/Gustation - . transduced on taste buds four basic tastes sweet salty sour bitter. spice is not a taste… it is

Chapter 4 The Components of the System Unit - . chapter 4 objectives. next. differentiate among various styles of system

SI – International System of Units - . si - (aka international system of units or s.i.) is a measuring system based on

Measurement Using the International System (SI) - . key question: what are the basic units of measurement in the si

Chapter 06: The System Unit - . competencies (1 of 2). describe the six basic types of system units discuss how a

The International System of Units - . 3.2. in the signs shown here, the distances are listed as numbers with no units