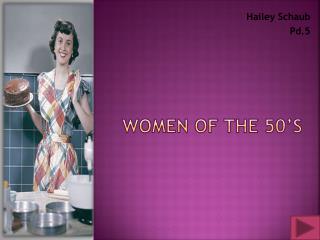 Women of the 50’s. Hailey Schaub Pd.5. Family. Fame. Jobs. Husband. Men in the 50s were a women’s main dependence. A women’s main job was to keep her husband happy. Women s Health The Evolution of VA Healthcare - 2. objectives. understand the functionality of the women's health

Youth Culture in the 50’s - . outline. rock and roll. http://en.wikipedia.org/wiki/image:elvis_presley.jpg. rock and

50's - 60's - . the beatles. the beatles are the most famous group of the 20th century. they influenced the style of all

Women ’ s Wellness - . voices of choice. who speaks for me, with and to me who chooses what is right for me and mine

Fashion and Trends in the 50’s - . derek robinson. clothing. the 1950’s clothing saw the dominance of designer names

Women`s Work? - . the topic of this unit is household chores &amp; who does them reading one is a humorous poem