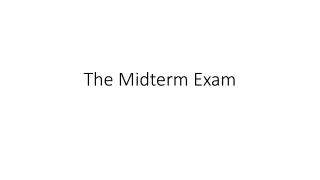 The Midterm Exam. HW 2 Again. Stress and Headaches. “ In the study, researchers… found that the greater the stress in a person's life, the more intense and frequent their headaches were .”. Correlation. A = amount of stress B = strength and number of headaches

Midterm Oral Exam - . cilc advanced 2 toic format. part 1. in this part of the test, you will read aloud the text on the

Midterm Exam - . yes, i know the first poll had a bug second poll is up and running: www.tinyurl.com/epiexam2 i will

3102 Midterm Exam - . agriculture section. notetaking. write one reason why you should take notes during a lecture .

Midterm Exam Review - . it would be wise to write down the questions and answers. what is a trading