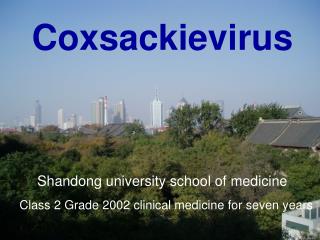 Coxsackievirus. Shandong university school of medicine. Class 2 Grade 2002 clinical medicine for seven years. Kayla Nicole Clingerman of Woollum, KY was tragically taken from us at the age of 6 from Viral Meningitis. October 13, 1997 - October 11, 2004.

Otitis media, Otitis externa , and Eye diseases: - . otitis media : is the inflammation of the area between eardrum

Sars Disease - . by: alex chapman, robert carroll. what is sars?. a violently infectious disease originating in china in

What is a Disease? - . an organism that lives on or in another organism and obtains food from the second organism is a

Disinfecting to Prevent the Transfer of MRSA &amp; Other Skin Pathogens in Wrestling - . history of pathogens in

Viral pathogenesis - . “no virus is known to do good. it has been well said that a virus is a piece of bad news wrapped