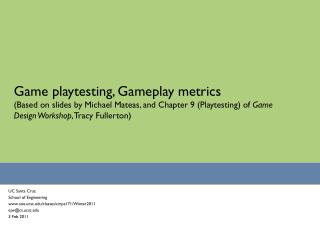 Primary ICT E-safety Workshops 1st and 2 nd February 2011 - . agenda. objectives. have you or your school dealt with any

Design and Implementation of Active and Cooperative Learning in Large Classes - . karl a. smith engineering education –

The Shocking Details of Genome.ucsc.edu - . history of the code. started in 1999 in c after java proved hopelessly