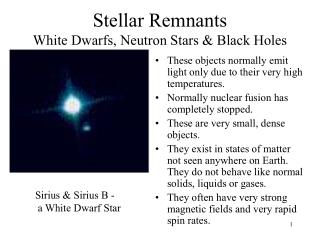 Chapter 13 Neutron Stars and Black Holes - . neutron stars. after a type i supernova , little or nothing remains of the

White dwarfs are remnants of stars that have depleted all fusible resources. - Divided lightcurve. searching for planets

White Dwarfs - . as you have just learned, medium-mass stars die by ejecting gas into space and contracting into white