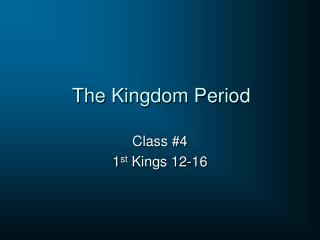 Animal Kingdom Period 1 - . jimmy fornara, andrew riccardi. adaptations. one example of adaptation is an owl. an owl has

The kingdom . - By : kouju &amp; dylan. the kingdom . kingdom wars. in medieval times wars among kings and nobles

The Kingdom - . part 3 concepts of the kingdom. summary: the bible is about the king, his kingdom &amp; his kids!

The Kingdom - . the bible is about a king, his kingdom, and his kids. kingdom: the governing influence of a king over h

Interlude: A Kingdom Story Waiting for an Ending The Intertestamental Period - . under pagan rule. persian (until 331

Unit 2 The United Kingdom Period 1 Warming-up &amp;Reading - . lead-in. which country will hold the 30th olympiad in

“KINGDOM LIFE” (YOU, IN THE KINGDOM) - . what is the kingdom of god? kingdom---basilia (greek) means- sovereign,